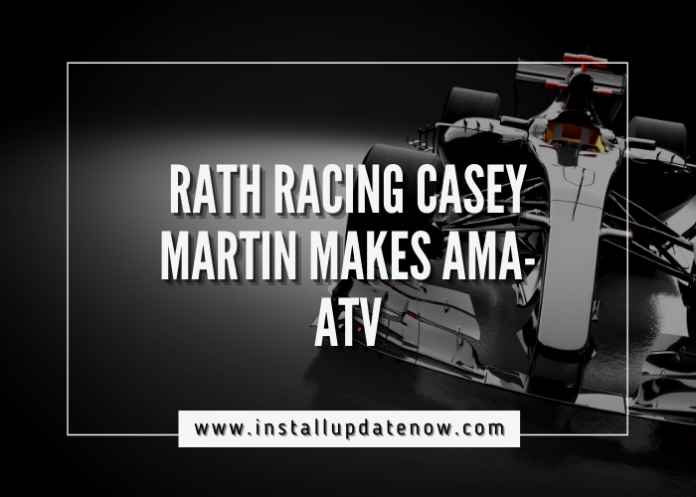 Daryl Rath Racing, Hutchinson (Minnesota), has been racing quads for over 24 years and has become an iconic figure in the sport. He built his company from a passion and hobby for racing. Rath Racing has been creating, engineering, and manufacturing the highest quality components for ATVs and UTVs since 1992. His labors have paid off in abundance, not only through the popularity and success of his products but also his racetrack results.

Casey Martin continued his relentless assault at this year’s AMA ATV Motocross ATV National at Pleasure Valley in Armagh, Pennsylvania, on his Factory Polaris Rath Outlaw 450MXR. Martin won the Pro Am Production class and earned two first-place motos. This team has been building momentum this season. With Martin’s latest win, they are making some history. This was the Factory Polaris/Rath Racing Team’s first AMA Pro Am MX victory.

Martin said that he was proud of his performance and stated that he knew what he had to do to win the Polaris. As the race progressed, Martin Cellular Transport Technology knew how to perform and didn’t want too excited. I kept reminding myself that it was important to be smart and ride well until the end. We’ve done everything right to the Polaris Outlaw. I know that I’ll finish the year strong.

Dave Porter, Martin’s mechanic, said, “In talking to Daryl Rath, I told him that I had some really great ideas that would put more power to ground. We agreed, and it turned out that my ideas were right on target. It is a great honor to have been able to participate in something like this. Martin is a hard worker and has the most positive attitude. He is the best, if not the greatest rider I’ve ever seen.

Rath continued, “Casey continues to get extremely comfortable riding the Outlaw.” He believes the bike is a contender, and that the small changes we make now will keep him on the front.

Rath Racing explained that he established a relationship with K&N in 2008. This was at the same moment his team started racing for Polaris. We use a lot of K&N filters and cleaners in our race vehicles, including the Polaris Outlaw 450, the MX, TT, Polaris Sportsman 850XP and our RZR. K&N products are also used in all of our tow vehicles.

Rath says, “We will continue to focus both on the GNCC Utility Class as well as the AMA Motocross Pro Am in 2010. We are thrilled to include the RZR section to our program, and believe there should be good new opportunities there.